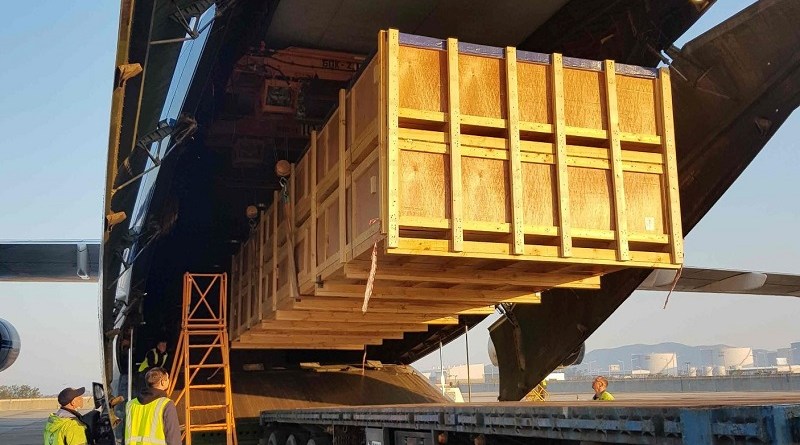 ABL have completed a complex project involving the chartering of 2 full AN-124 Ruslan aircrafts for the delivery of critically urgent boiler equipment.

Renaud Stiers at ABL describes the shipment; “The cargo was flown from South Korea to the USA and had been made available just before the ‘Golden Week’ in Asia. Initial plans for packaging were made to suit the shipment by 3 full AN-124 chartered freighters and with a concern for cost-optimisation and in joint communication with the air-carriers’ loadmaster and tech-crews, we arranged for the cargo to be repacked suitably for airfreight in order to save 1 full AN-124 plane. By reworking the packaging, the total numbers of crates could be reduced in such way to finally fit 2 chartered AN-124 aircrafts with 2 smaller crates flown separately.

The cargo was packed at the Korean manufacturers premises and was delivered in 2 separate lots to Incheon International Airport where it was successfully loaded in a direct transshipment on board of the 2 aircrafts. The 2 Antonov aircrafts were flying at a 2-day interval from Incheon International Airport (ICN) to Chicago (ORD) via Anchorage (ANC) for crew-rest and fuel-stop. Once landed in Chicago, the aircrafts were discharged directly and the cargo was delivered to the site, around 60 miles from the airport.

Excluding the extensive upfront preparatory work involving the suitable crating of the cargo (considering the maximum capacities of plane, the CoG and gross weights of the cargo for stability in the air as well as the capacity of the internal crane of the plane), the cargo was delivered door-to-door in less than 4 days’ time for each aircraft.

ABL would like to respectfully thank all their partners involved in the delivery of this critically urgent cargo including the teams in Korea and the USA as well as the very experienced air crew on both planes who contributed fully to the success.”