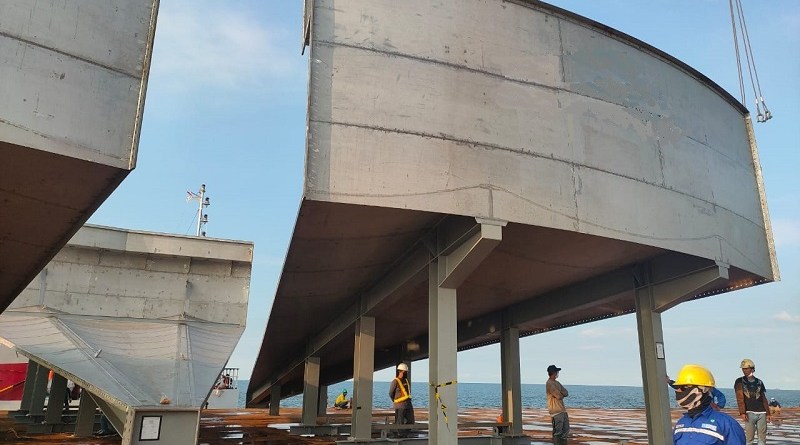 After several months of planning, C.H. Robinson Project Logistics put their transportation plan into action to move 29,500cbm of cargo by barge and ocean vessel to New Caledonia. However, the job was not without additional challenges!

“Before the loading operations in Indonesia began, the Port Captain announced all operations were suspended until further notice. Our team assumed the halt was due to COVID-19, but instead it was due to the recent discovery of World War II bombs at the loading area. The team quickly adjusted their strategy and were able to continue operations just seven miles away.

The cargo was loaded at anchorage onto a chartered vessel off Gresik in Indonesia. By loading the cargo at this location, C.H. Robinson was able to reduce costs by approximately USD $200,000 in port charges – a very attractive and economical solution for the customer. Once loaded, the cargo travelled to its final destination of the customer’s private wharf off the coast of Australia in Prony Bay, New Caledonia.

While managing quick changes to operations, the C.H. Robinson team was also closely monitoring the weather forecast for swells and waves throughout the day and contingency plans were put in place in case the water became too rough. This gave the team a short window for loading which was successfully accomplished, but that was not the last obstacle they would face.

Once the cargo arrived at the destination it was revealed that one of the partnering parties did not arrange for fumigation when ants were discovered on the wooden dunnage. Operations were suspended again until fumigation could be performed and clearance from authorities was given to begin unloading.”

“Even with these challenges, C.H. Robinson was able to deliver the cargo safely and without incurring any vessel detention charges, much to the satisfaction of their customer.”