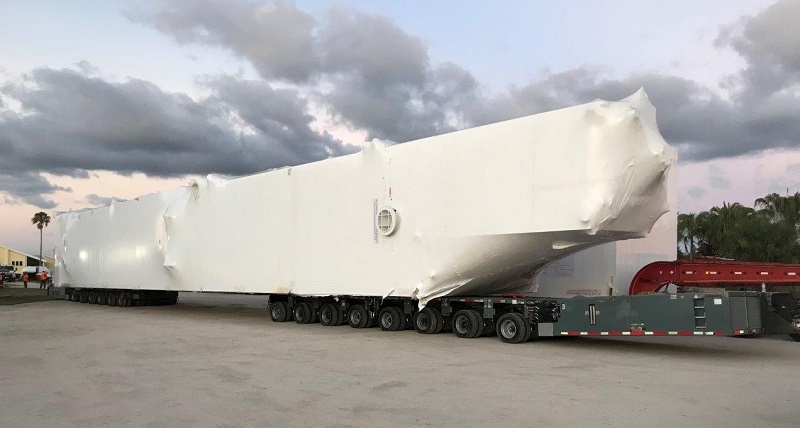 The project logistics team at C.H. Robinson recently helped move liquefied natural gas (LNG) equipment from China to Florida. The move consisted of 16 pieces and combined, they totalled approximately 2,300cbm. A cold box and a cold box piping module were the largest pieces.

In China, C.H. Robinson’s local experts arranged for the cargo to be delivered from the fabricator to the nearby port of Zhangjiagang. From there, it was loaded onto a chartered ocean vessel. The cold box was large and heavy, measuring 36.28 x 6.15 x 4.64m and weighing 185,500kg. While the cold box piping module wasn’t quite as large (5.17 x 4.25 x 6.50m and weighing 17,300kg), its height still posed a challenge.

The initial drawings showed the module’s height as 4.99m. However, upon delivery at the terminal, it became clear that it was significantly taller. Re-measuring at the terminal showed the module was actually 6.5m tall. This difference meant the team needed to reconfigure the initial stow plan entirely before shipping. The new plan required the tween deck to be raised as this piece was being loaded in the lower hold. Thanks to the team’s established relationships, this was handled immediately and the vessel departed as scheduled.

Upon arrival in Port Canaveral, Florida, the weight of the cold box and the height of the module required both units to be offloaded directly from the vessel onto a waiting barge for transport to a landing near Titusville. From there, both pieces were offloaded and trucked to the final destination in Mims.

The distance from the barge landing to the project site was less than five miles but the travel time took the better part of a day. The journey required electrical wires to be lifted, trees to be trimmed, and a railroad arm to be raised in order for the units to travel safely to the plant. This required dealing with several different phone, rail, utility, and power companies and arrangements also had to be made for bucket trucks, police escorts, and civilian escorts. Careful collaboration and planning meant the pieces arrived on time and without incident.